On Friday, October 2nd, during the Online Meeting of the Alpine Committee the proposals for the Men’s and Women’s 2020-2021 World Cup calendars were presented. One day later they were officially approved by the Council. The main focus of the new calendars for the upcoming season is to deliver a safe and fair competition.

These new calendars aim to provide a safe environment for athletes to compete and are based on the requirements to reduce numbers and costs for teams, organizers, and stakeholders. To limit interaction as much as possible, a number of events were separated to have only Women's’ or Men's’ races. Speed and technical events were also split where possible.
All races will take place in Europe. Only one event is going to take place outside the European borders, a women's speed weekend in Yanqing, China in late February.

The new calendar features a double weekend in Val d’Isère (FRA), with two Giant Slaloms, followed by a speed block (Super-G and Downhill). In late December, along with Sunday’s traditional Giant Slalom, Alta Badia (ITA) will host a Slalom on Monday. In January, Swiss venue Adelboden will host a long weekend with a double Giant Slalom and a Slalom. Finally, only the speed athletes will be racing in Garmisch-Partenkirchen with a Super-G and a Downhill on the menu. 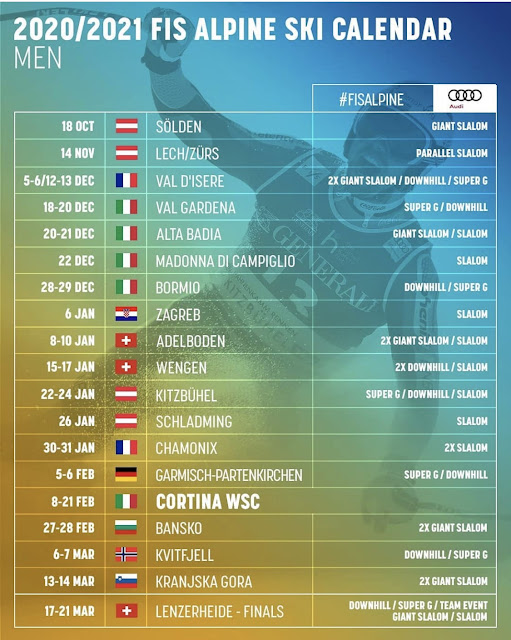 As far as the Women's calendar is concerned, there will be two Slalom races in Levi (FIN) and two Giant Slalom events in Courchevel (FRA). In the final phase of the season, the World Cup will be back in Jasna (SVK) after 4 years.
Overall the calendars feature 39 races for the men and 35 for the women, spread over 18 different venues. The highlight of the season will be the 2021 World Ski Championships in Cortina d’Ampezzo (ITA) from 8 to 21 February. The season will wrap up with the finals in Lenzerheide (SUI) from 17 to 21 March 2021. 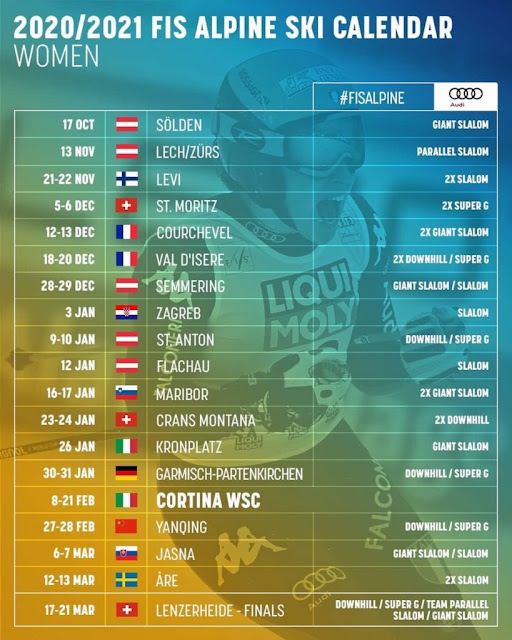