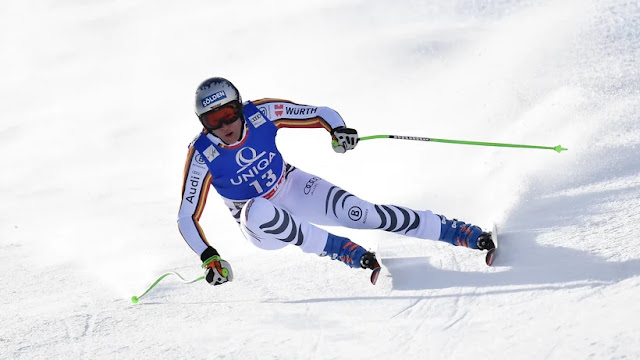 German speedster Thomas Dressen found again the right line and won the 5th World Cup race of his career. Dressen takes his third World Cup win of the season in Saalbach with 4 Swiss occupying the next 4 seats: Beat Feuz +0.07, Mauro Caviezel +0.09, Carlo Janka +0.26 and Niels Hintermann +0.49.
For Dressen is the second Downhill victory in a row after his success in Garmisch-Partenkirchen in early February. He proves once again that he is the best German Downhiller of all-time, being the first German athlete to win two consecutive downhill races.

"Today it was just amazing and I was actually surprised when I saw the green light after the mistake I did at the top. I went to school just 30 minutes from here, and today I met some classmates and teachers from my school. It's just like coming home", said Dressen after the race.
Runner-up Beat Feuz (SUI), takes once again the second place (+0.07) and fails to grab his first Austrian victory. It's the sixth time that Feuz finishes second in an Austrian venue. The Swiss skier shows again an incredible consistency, achieving the 18th podium in the last 21 Downhill races.
With today's second place, Feuz practically ensures the crystal globe of the specialty, adding the third in his account after the two achieved in the last two seasons.
Posted by Ski Paradise at 2:39 PM