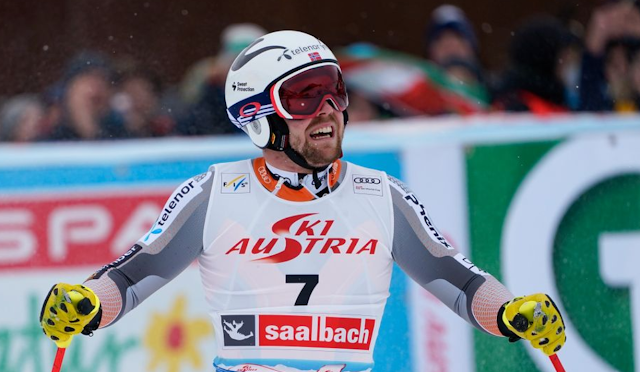 First victory of the season for Aleksander Aamodt Kilde. Mauro Caviezel, second +0.15, and Thomas Dressen, third +0.31, repeat on the podium.
After waiting for around two hours for the wind gusts to calm down, at 13.00 CET it was finally time to race. Kilde beat the weather and all his opponents to take the second Super-G victory of his career, once again in Austria.
Aleksander Kilde was very satisfied after the race: "It's a really good feeling for me, I wanted a top win today. Pinturault and Henrik are very consistent in the technical events, so I have to step it up in the speed events!"

Mauro Caviezel finished second and sealed another podium after Thursday's third place in Downhill.
Thomas Dressen can also not complain about his time in Saalbach. After winning Thursdays' Downhill, the German grabbed his third career podium in Super-G, finishing third, 0.31s behind the leader.
Thanks to today's race Aleksander Kilde now leads both the Super-G and the Overall standings.