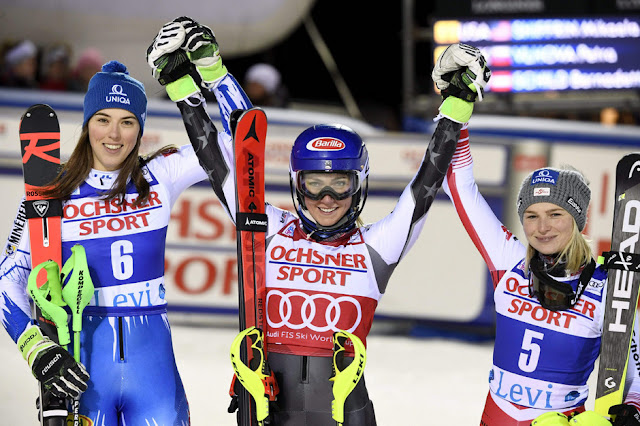 Mikaela Shiffrin continued her unbeaten streak in slalom with a demonstrative victory on Levi (Finland). The course held up despite warm weather conditions in Levi on Saturday, and Shiffrin dominated both slalom runs to finish ahead of Petra Vlhova and Bernadette Schild, who were respectively 0.58 and 0.79 seconds off the winning pace. It was Shiffrin's 43rd career World Cup victory.

Mikaela Shiffrin won her third reindeer and slalom race at Levi (FIN) to bring her total World Cup slalom victories tally of 33 well within striking distance of all-time leader Marlies Schild (35).
"I was even surprised at how good the course felt with the warm conditions. The snow held up really well, and I was able to really push. I had a little bit of a scary moment on the top of the pitch, but I kept fighting and made it to the finish. That was fun", said Shiffrin following her win. "It’s the first race of the season, so there’s some nerves, there’s some excitement. Nobody knows how fast they are. So it’s always a really nice challenge, and it’s a nice slope".

The 2017 victor Petra Vlhova of Slovakia gave chase in the second run to improve her position from third to second place. But she was still just over half a second shy of Shiffrin in the end. Bernadette Schild of Austria skied the fastest second run to leap a surprising nine positions from 12th place after the first run onto the podium in third place.