Petra Vlhova Wins First Slalom of the Season in Levi 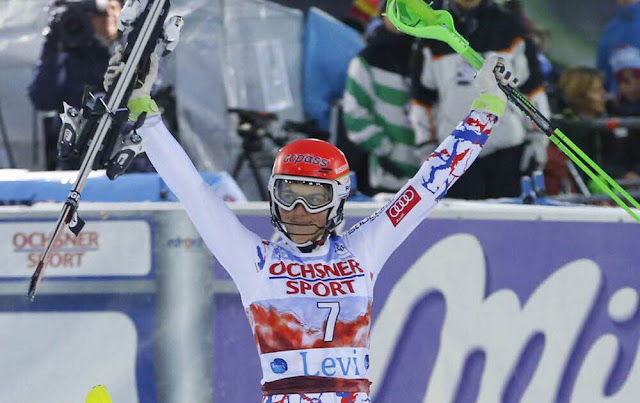 Slovakia’s Petra Vhlova picked up the 2017-2018 World Cup slalom season right where she left off last March. The Aspen Finals winner turned on the jets to best American Mikaela Shiffrin by 0.10 seconds on the Levi Black slope in Finland, claiming the opening victory in the Olympic slalom year. Sitting 0.21 seconds behind Shiffrin’s leading pace after run one, Vlhova powered into the top spot with a hard charge on her second run. Switzerland’s “Sendy Wendy” Holdener also pushed her limits on the second run and was rewarded with a move onto the podium in third place.
As is a tradition in Levi, the race winner is awarded a baby reindeer which remains on a nearby farm. Vlhova followed the lead established by Marcel Hirscher and Henrik Kristoffersen in past seasons and named her first reindeer “Igor” after her father.

"I won the last race (in March) and it was difficult to continue so I’m really happy because it was a really tough day. Mikaela – she is always fast. But now, I am fast", said Vlhova.
Vlhova joins her countrywoman, Veronika Velez-Zuzulova, as one of only three women (Shiffrin the third) to win back-to-back slalom races since January of 2016.
“It’s amazing because like I tell Mikaela, she is really strong and fast. So for me, it is the best day today", remarked Vlhova.
The 2017 Overall champion, Shiffrin, was able to move into the overall lead for the new year – currently 10 points ahead of Vhlova and 25 ahead of Holdener – after the first two races of the season.
The firm track north of the Arctic Circle held up for later bib numbers as well. Anna Swenn-Larsson of Sweden punched into seventh place from outside the top-30 at the start. Among other big movers, Stephanie Brunner of Austria skied into eighth from bib 53 and Norwegian Mina Fuerst Holtmann finished 13th from bib 51 in her World Cup slalom debut.