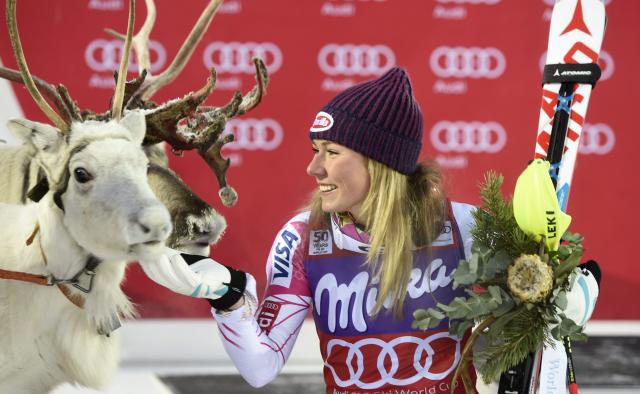 Mikaela Shiffrin continued her unbeaten streak in slalom with a demonstrative victory on Levi (Finland). After leading the first run of the first slalom of the season, The Olympic champion dominated both slalom runs to finish ahead of Switzerland's Wendy Holdener and Petra Vlhova, who were respectively 0.67 and 0.75 seconds off the winning pace.
It was Shiffrin's 21st career World Cup victory. She has now won in the last nine slalom races she participated in. The last time she failed to win in slalom was in Flachau in January 2015 (third).
Mikaela Shiffrin is aiming to get her slalom crown back, even though she admits that she’s feeling her contenders are getting closer and closer.
"I’m always more nervous at the first race of the season, and the other girls are not going to slow down, but my coaches were very supportive and told me 'give your best and let your head get out of the way', that helped. I feel like I’m on track for the rest of the season".
After Petra Vlhova skied on the safe side in the first run and ranked 4th, she managed to cruise to a 3rd-place finish in the second run.
"We talked with my team that I have to go full gas in second run because my first run was not the best I can do. I’m happy it worked out. The good result in Sölden helped me, it’s good for my head and helps also for slalom".
Wendy Holdener remained steady and earned her 8th career podium. It looks like the hard work in that discipline paid off for the Swiss racer, who could already celebrate an Alpine Combined and a City Event World Cup win. It looks like she is knocking at the door of her first slalom win.

"I really wanted to go for it today, and for sure the end of last season was great, so it gave me confidence. I had to learn to be more aggressive on the skis. I really love skiing and it wasn’t easy to focus and give everything".