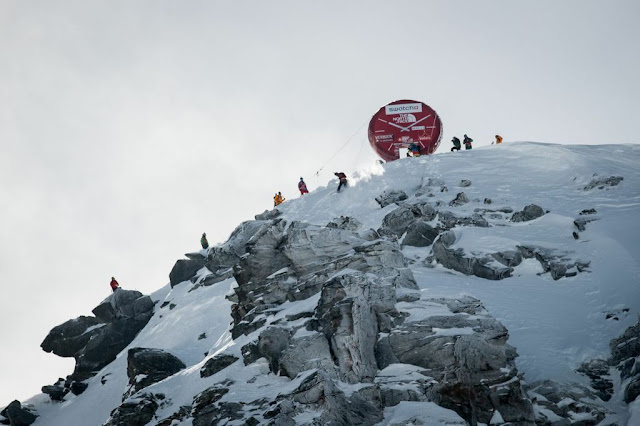 The final stage of the Swatch Freeride World Tour 2016 will be held on Verbier’s legendary Bec des Rosses.
Some mythical mountains helped build the reputation of the villages and valleys, in their neighborhood, most of the time through a long human and sporting history, written by men strongly willing to reach their summits. These myths, since then, ensure the growth and prosperity of these villages, that became ski resorts. Most of them arouse from the 19th century, sometimes even before.
But there is an exception in the restricted list of mythical mountains; a mountain whose legend was built much more recently, much quicker. And that legend is not due to the bravery of men who attempted the ascent. No, the summit, unlike its peers, can be reached without any major obstacle. What has contributed to its lightning reputation is linked to the exploits of a few men and women, not in the ascent, but the descent, of its breathtaking steep face.
The advent of freeride revealed its impressive north face, at the heart of the Swiss Wallis. Today, it is renowned as one of the most dreaded in the world. Within only a few years, its name has gone around the planet: The Bec des Rosses.
Extreme skiing revealed the Bec des Rosses beyond the borders of Switzerland. It now also gives the opportunity to discover others aspects of its history. Through testimonies of the elderly of the valley as well as mountain guides, among many others, this film traces the advent of a unique mountain to passionate people around the world, and uncovers unexpected events of its history.


Since its inception in 1996 the Xtreme has been considered the most prestigious event in the Freeride world. For the grande finale of the Freeride World Tour the elite of Freeride will tackle the mythical North Face of the Bec des Rosses, a dauntingly steep and frighteningly jagged 500m rock-face. In places, the Bec des Rosses presents 55 degrees of slope. In an upright position one can almost lean on the face with ones elbow. With steep and narrow couloirs, high rock cliffs, changing snow and terrain, it demands technical skill, great physical conditioning and a connection with the mountain that only experience can bring. Around 5000 spectators will join the riders at one of the most beautiful natural arenas of the Alps, the Col des Gentianes in Verbier.
Posted by Ski Paradise at 3:49 PM