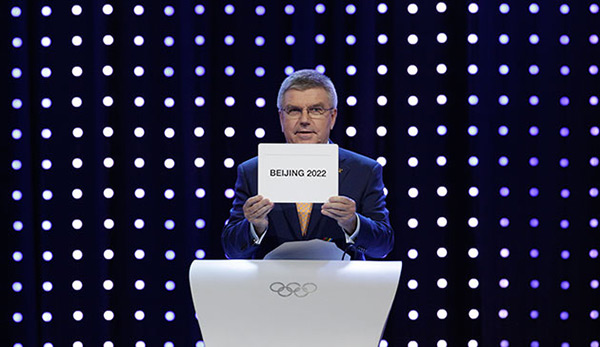 The International Olympic Committee (IOC) today named Beijing, People's Republic of China, as the host city of the Olympic Winter Games 2022.
The Chinese capital was chosen over Almaty, Kazakhstan, in a vote at the 128th IOC Session in Kuala Lumpur. Beijing received 44 votes to Almaty’s 40.
As a result, Beijing will become the first city to host both a summer and winter edition of the Olympic Games, following the city’s successful staging of the Summer Games in 2008.
Right after the election, representatives of Beijing together with IOC President Thomas Bach signed the Host City Contract (HCC). This is the first time that the HCC is being made public, which is a result of the recommendations of Olympic Agenda 2020 - a reform package that significantly changed the host city selection process.
Beijing aims to use the Games to accelerate the development of a new sport, culture and tourism area, and to encourage interest in winter sports in a region that is home to more than 300 million people in northern China.
Although the bid process for 2022 began before the approval of Olympic Agenda 2020, the reforms have already had a significant impact on Beijing’s Olympic plans. Olympic Agenda 2020 calls for a stronger focus on sustainability, legacy, and transparency, while making it easier for host cities to tailor Games that meet their needs rather than trying to fit a template.
Beijing took advantage of the flexibility provided by Olympic Agenda 2020 to improve its plans for the Games and reduce costs. The city will rely heavily on existing venues, including those built for the Games in 2008, such as the iconic Bird’s Nest stadium.
Beijing’s proposed budget for investment in Olympic villages, sports venues and other infrastructure totals 1.5 billion US dollars – significantly less than for Olympic Games in the past. The proposed operational budget should be fully offset by revenue from ticket sales, marketing sponsorships and other income. Thanks to an additional contribution from the IOC of approximately 880 million US dollars to support the staging of the Olympic Winter Games in 2022, Beijing is confident that it will either break even or make a profit.
In addition, post-Games legacy uses for all permanent venues have already been identified to ensure that Games-related investments deliver benefits for years to come.
Posted by Ski Paradise at 10:59 PM No comments: