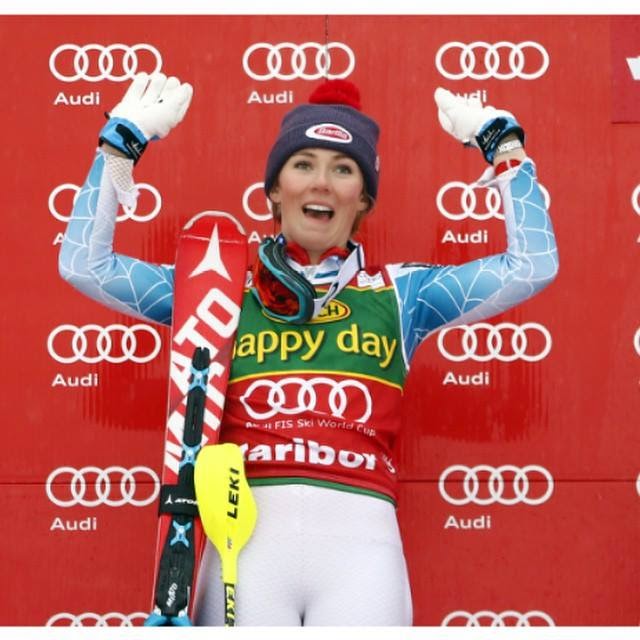 On a wet and dreary day in Maribor, Slovenia, Mikaela Shiffrin skied through the rain to win her third World Cup slalom of the season, besting Veronika Velez Zuzulova by a large margin of 1.03 seconds. World Championship bronze medalist, Sarka Strachova, rounded out the podium in third, 1.05 second behind.
World Champion Mikaela Shiffrin, who admitted she liked skiing in the rain, ran fastest in the opening slalom run and didn't let anyone come close in the second, clocking a combined time of 1:39.12, with the rest of the pack more than one second off the pace.
"Sometimes I like skiing in the sun too", Shiffrin said laughing. "We had a little bit of both this weekend. The rain doesn't bother me too much".
Shiffrin built a substantial lead in the first run as she was 0.68 seconds ahead of Sarka Strachova.
"I felt like I really I had to attack in the second run", said the 19-year-old. "I feel best after my races when I try to put two really good runs down and in each one I try to be better than in the last. But I knew I had a little bit of time so I had to be smart and not go crazy, because the goal is to get the globe this season. I think I was a little bit smart in the second run, but I was still pushing it".
With yesterday's results, Mikaela Shiffrin moved up to first place in the slalom standings. She leads Frida Hansdotter by 30 points. The Swede had to be content with 9th place today, her worst result of the season.
"The slalom globe is very close to my heart", concluded Shiffrin. "It was my entrance onto the World Cup circuit and to having success in my career. I really hope I can hang on to this. I really have to fight for it in the next two slalom races".
Slovakia's Veronika Velez Zuzulov moved up from 8th position after the first run to finally finish second, 1.03 seconds back, for her first podium finish this campaign.
"For sure the weather was not the best, but I think the conditions were actually really good", commented Velez Zuzulova. "That helped me get a good result in the first run, starting with bib 23. It's a great day for me. Being back on the podium makes me really happy".
Sarka Strachova, who earned bronze at the World Championips, managed to hold on to a podium spot, for her second top-3 finish this season.
"It was a tough race", said Strachova. "The first run was good and the second, in such conditions, was actually also really good. I made a mistake in the middle part of my second run. But once in the finish and knowing I was going to be on the podium again was a great feeling. I am in a good shape now and the self-confidence is back again".
Posted by Ski Paradise at 6:53 AM