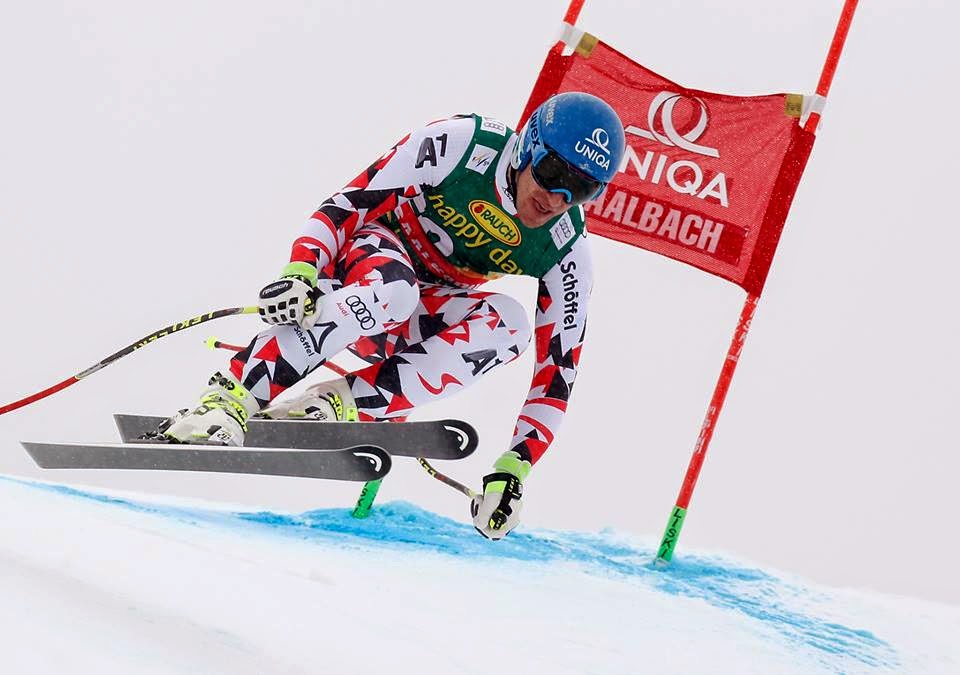 On a turny course set by American coach F. Carey with plenty of rhythm changes Matthias Mayer was able to find the perfect pace and grab his second victory in a row. With a time of 1:31.53, the Austrian he took home his first victory in the discipline, a success he attributed partially to the recent giant slalom training he had been focusing on.
"I’ve trained a lot of GS so I had a little bit of an advantage today because of the turny sections of the course. I knew I can ski the fast parts, so today was a perfect combination and good run for me", Mayer said. "It’s amazing. I live just two and half hours from here. All my friends and family are here. It was an unbelievable weekend for me. Yesterday, this run was perfect and today, too, so it couldn’t be better".
Adrien Theaux made the news two days ago when the photo of his spread eagle over the Audi built into the final jump went viral on social media, but today it was his first World Cup podium of the season, a 2nd place in the super-G that got him smiling.
"It’s been a nice week for me. I felt good in the training, which is why I did that spread eagle. It’s something I did for me; I had no intention for it to be picked up online. Today with the flat light it was very difficult, lots of rolls but I am very, very happy with my run today", Theaux said.
With a time only 0.27 seconds slower than the winning one, Kjetil Jansrud grasped his fourth podium and increased his lead over Dominik Paris in the discipline standings and with two races left is currently 145 points ahead of the Italian.
"I came into the finish. I don’t think I even looked at the board before hitting my poles. I felt personally that I made a few mistakes up top, which could have costed me the victory. But that’s assuming you’re going to win every race. It’s not a good way to be an athlete. I have to apologize for throwing my poles down", Jansrud explained his first reaction.
Jansrud was at first not happy with his run but quickly realized his run would be enough to bring him valuable points in both the SG standings and in the Overall one.
"These are important points in the Overall — you always want more. I wanted 200 points — that’s the best you can have, so you always aim for that. Normally, you understand you can’t have that much. Yesterday, I was a little disappointed. Today, I’m happy with the podium".
Posted by Ski Paradise at 7:59 AM