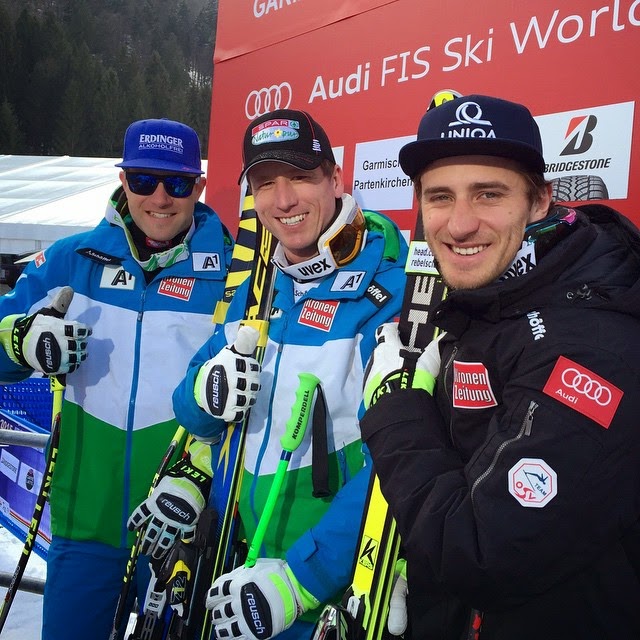 The Austrian team’s domination in downhill continued this Saturday in Garmisch-Partenkirchen. The red-white-red team not only claimed the three podium spots for the second Saturday in a row but also managed to place six of it’s nine starting athletes in the top ten.
After winning both training runs, Hannes Reichelt didn’t seem to be affected by today’s multiple delays in start time due to a foggy section in the upper part of the slope, nor by the final call to lower the starting position to the lower, super-G one when it became clear that this was the only chance for the race to take place.
With a time of 1:11.90 Reichelt had a great run and after finishing a mere 0.01 seconds ahead of Romed Baumann, he clenched his second downhill victory of the season and 10th career victory.
"This is great because the Kandahar is a classic downhill course", said Reichelt. "Today from the half start it was a close race — I think less than one second separated the top 30 — so you really had to be fast to get the victory. I’m happy that we were able to race because it’s really important for our sport", he said.
Baumann hasn’t stood on a World Cup podium in just over three years so today’s second place was a great step forward for him. Of course, missing what would have been his first downhill victory by such a small margin can be a bit disappointing but Baumann remains hopeful that sooner or later the clock will be on his side.

"Today was really close, a bit like in Groeden when I was out six-hundredths behind and in Chamonix when I was second it was also a very close race. Maybe some day the hundredths will be on my side", Baumann said. "The result is amazing for our team and for our suppliers. It’s my first World Cup downhill podium in a long time. I’m very happy to give my team and especially Salamon a good result".
Matthias Mayer’s back-to-back World Cup victories from Saalbach seemed to have taken a toll on his health and he has been battling with a cold in the last few days and even opted not to start the second training run on Friday. Not feeling 100%, he was more than pleased with his podium finish and especially the fact that he got to share it with his teammates.
"I’m happy with my third place because today it wasn’t easy for me. I’m a little bit sick and tired. I’m glad the race was a little bit shorter today", Mayer said. "It’s just like Saalbach. It’s pretty awesome for us. We couldn’t have imagined that earlier in the season. Three Austrians on the podium, yeah, couldn’t be better".
Posted by Ski Paradise at 5:55 PM