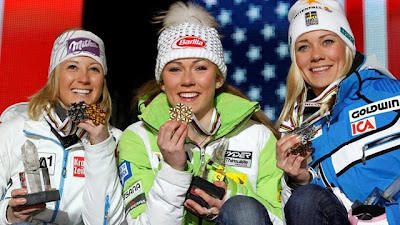 Mikaela Shiffrin put down two outstanding runs today and showed once again that she is in a league of her own in Slalom. Maria Hoefl-Riesch, who was in third place after the first run climbed up one place to finish in second place, 1.06 seconds behind Shiffrin. Tina Maze finished third, crossing the finish line with a combined time 1.61 seconds slower than Shiffrin’s.
Shiffrin earned herself 100 slalom points, and got to keep the red leaders’ bib she earned last season.
"There's definitely some relief there…one of my goals is to keep my slalom standings, and it's nice to know I'm not that far off", she said with a smile.
It has been a first slalom of the season full of surprises, especially as in the first run the wind played tricks with the races through the whole first run.
Tina Maze had high expectation coming into the new season, so she seemed slightly disappointed by her third place.
"Of course I always expect the best from myself, especially after the season I had last year. But I am also learning that it doesn’t really matter what I did or what I will do, I am learning to live in the present so this third place gives me confidence that I am on the right track", Maze said at the press conference.
One young lady today made it clear that her first run had little to do with wind luck and all to do with skill. Christina Ager definitely proved to be the biggest surprise of the day. The Austrian newcomer, who turned 18 years old just five days ago started her first ever World Cup race this Saturday in Levi with bib 53. She skied an outstanding first run, finishing in fifth place. She might have seemed overwhelmed when realizing how fast her run had been, but she was able to regain focus for the second run and ski even faster! She finished in an impressive fourth position, missing the podium by a mere 0.07 seconds.
Ager was far from the only surprise of the day.