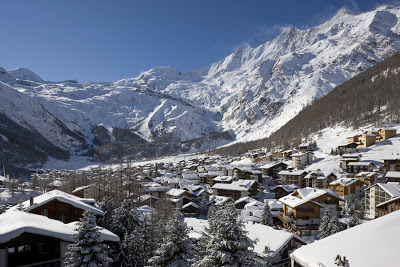 Yesterday the results of a questionnaire for "Best ski resort" with over 40‘000 guests were presented. Saas-Fee / Saastal was voted best Swiss ski Resort. Internationally it was even voted to second rank out of 55 top ski destinations in Austria, Germany, Italy, France and Switzerland. In terms of snow reliability, slope preparation and cosiness, Saas-Fee / Saastal hit top status. Together with Aletsch Arena and Zermatt, 3 of the first 5 ranks are taken by valaisian destinations.
Right on time for the start of the winter season 2012/13, Saas-Fee / Saastal is climbing to the top with the best ski resorts of the Alps. The independent guest satisfaction study "Best Ski Resort" is counted as one of the biggest and most significant studies in the alpine area and has questioned more than 41’000 winter sport guests. The guests appreciated the high snow reliability, great slope preparation and the cosy feeling of Saas-Fee / Saastal. The top placement in these three categories led to the gold medal in Switzerland. Internationally, the winter sports guests voted Saas-Fee / Saastal onto second place out of 55 ski resorts in the European alps.

Snow is guaranteed
"About 70% of all ski slopes in Saas-Fee are guaranteed for snow", says Rainer Flaig, CEO of the Saas-Fee cableways. The top rank in snow security is due to the unique glacier area and the unmatched height of the area, which is offering fun in the snow up to a height of 3’600 meters altitude. Above this, Saas-Fee cableways invested strongly into the artificial snow production over the last years.

Slopes are fulfilling highest demands
Also in the area of slope preparation, Saas-Fee / Saastal is in first place across Europe. "The Saas-Fee cableways has strongly invested in the infrastructure for preparing the slopes. This top rank was achieved with the help of our highly qualified and experienced teams who secure the quality of the slopes. That even in summer the slopes are living up to the highest expectations are demonstrated through the numerous national and youngster teams, which train in Saas-Fee for competitions regularly since many years", said Flaig.

Authenticity essential
The car free vacation resort in the southern canton Valais convinces also in the category cosiness (1st place) and ambience (2nd place). Pascal Schaer, Director Tourism, is convinced: "The top ranks achieved in these two categories clearly shows that authentic and decelerated vacation resorts are en vogue. Further are the historic and landmarked `Stadel’ made out of sun blackened larch wood, the narrow alleys and stone covered roofs are unique for the guests experience. Here it shows that product quality and authenticity are looked for by guests".

Saas-Fee / Saastal even more attractive in winter 2012/2013
In the coming winter season, Saas-Fee / Saastal is raising the attractiveness even further. Already for the coming weekend on November 10th /11th 2012 the slopes and facilities are going back in service up to Morenia (2’500 meters altitude). Additionally the Saas-Fee cableways is the only Swiss mountain cable car and railway company which lowers their prices for kids and adults – according to a questionnaire of 20 of the largest Swiss ski resorts conducted by a Swiss TV broadcast. The 6-day destination ski pass is lowered by over 10%, daily passes by 5.5%.

Saas-Fee / Saastal is on course for growth
Pascal Schaer is optimistic for the future:"After the decline of the overnight stays, the downward spiral was stopped in summer 2012. The successfully initiated ‘cable cars and bus included’ in the past summer has made the Saastal the largest all-inclusive destination in Switzerland. This was crowned by a guest growth of over 30%. The big challenge is now to return to the growth path also in the Euro area and to unlock new guest segments". This has already begun in the far markets, were the guest numbers in summer show a drastic increase from Japan (+78%) and Russia (+22%).
Posted by Ski Paradise at 7:02 PM

Saas-Fee is really one of the best swiss ski resort today and I myself can say that. My experience on that place is magnificent and I can still remember how I played with snow and make my own snowman.