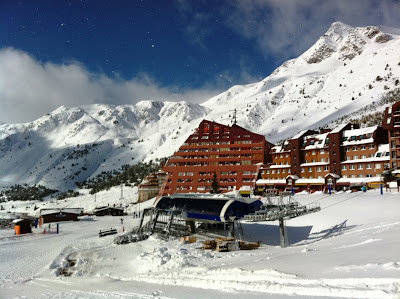 About a quarter of the world’s leading ski resorts have now opened with the first big wave of openings last weekend, the numbers will now grow rapidly with about a third more following on each of the next two weekends, almost all of the remainder on December 18th.
The good news is that conditions are great in most of Europe and North America. There are huge snowfalls in the Alps today (Wednesday 1st December) alone. Skiinfo had issued more than 590 powder alarms by lunchtime, with the largest fall so far reported in the past 24 hours of 70cm.
The only area where a delayed opening has been reported is West Virginia in south eastern USA. In the Alps falls of up to a metre in seven days have been reported, with low temperatures bringing more snow and good snowmaking conditions. It’s a similar story in Western North America still with several resorts reporting a foot of new snow in 24 hours. In Scotland four out of five centres will be open this weekend – only Glencoe is yet to confirm it will open.
Most snow was reported on Monday in Austria. Bad Kleinkirchheim issued a powder alarm with 30 cm of fresh snow then. The Mölltal glacier reported 20 cm in one day. Many other resorts including Sölden and Schladming Dachstein got 10 cm of powder. Schladming, having a snow cover of half a metre now, will celebrate its winter opening on Saturday (Dec 4th), with a concert of pop star Ke$ha. Many other Austrian winter resorts have announced their ski openings for this weekend, too, including Bad Gastein (with a snow depth of up to 80 cm), Serfaus-Fiss-Ladis (55cm) and Saalbach Hinterglemm (35 cm).

The cold snap has continued in France for the past week bringing fresh snow daily to most resorts. As a result more areas than expected opened last weekend and another 30 are set to follow this Saturday, bringing the total open in the country to around 50. There are more big snowfalls in the country today with Montgenèvre reporting 50cm, La Clusaz 40cm and Chatel 30cm among the big beneficiaries.
Three of the world’s deepest snow depths so far this winter are currently being claimed by Italy with the Presena glacier above Passo Tonale boasting the most with a four metre (13.3 feet) snow depth already. The year round ski area of Val Senales has 2.7m (nine feet) and Madesimo 2.1m (seven feet). The country also has the most snow reported in the past seven days for one resort – 115cm (just under four feet) for La Thuile in the Aosta Valley on the French border which is also reporting an incredible 70m (31 inches) of snow in the past 24 hours.
In Switzerland St. Moritz got 15 cm of powder on Monday and reported another 10 cm down to the village today. Arosa, Saas Fee and Davos also reported snowfall. The latter has a snow cover of 86 cm at the top station and 21 cm in the village now. Saas Fee even measured 178 cm of snow on the mountain. Several Swiss ski resorts (like the Aletsch Arena) want to open their slopes for the winter season this weekend.
It’s snowy too in the Pyrenees where Astun (picture attached) in Spain is reporting the deepest snow at 125cm (just over four feet) .
It remains very cold in Norway where temperatures are typically double digits below freezing. There has not been much new snow but the snow that has fallen isn’t going anywhere. Branas in Sweden has the most with 75cm.
It’s all white on both East and west coasts of Canada. In the East resorts like Mont Ste Anne reported falls of up to 30cm at the weekend, on the West, Whistler Blackcomb says it just had 37cm of new snow in the past 24 hours. "Conditions for skiing and riding are getting better and better every day. Whistler Blackcomb has a current snow base of 137cms with total of 266cm (8.7 feet) snow so far this season. The forecast is calling for more snow to hit Whistler Blackcomb tonight and into tomorrow followed by sunny skies", said a resort statement.
More resorts including Fernie and Revelstoke are due to open this weekend.
More resorts have opened on the east and west Coasts of the US and the snow has kept falling, particularly in the West. Jackson Hole opened at the weekend with the most snow, the most terrain open and the most visitors ever reported on opening day in its 45 year history. The deepest snow is in California where five resorts report snow depths of 2.44 – 2.54m (about eight feet) for the first day of December!
Posted by Ski Paradise at 12:04 AM