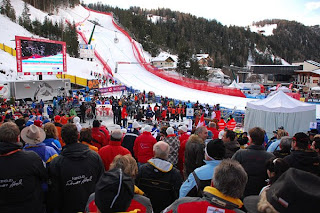 Since yesterday Val Gardena-Gröden hosted the Men's Audi FIS Alpine Ski World Cup. On Friday 19, the World Cup Super-G race took place in the northern Italian resort. Werner Heel ripped the course and won by .43 of a second over Swiss Didier Defago. It was the first Italian home victory at Italy's premiere World Cup site in seven seasons. Today the Downhill will take place on the legendary Saslong slope. The Val Gardena and the magnificent three villages of Ortisei, S. Cristina and Selva Gardena, surrounded by the scenario of the Dolomites, offer a paradise of opportunities for ski with 175 km of pistes, 85% of which has snowmaking cover, accessible by 83 lifts.The resort is lift linked to the Sella Ronda sector of the Dolomiti Superski pass. The Sella Ronda is probably the world’s third largest lift-linked ski area with over 500km of lift linked ski runs. The Dolomiti Superski pass is one of the world’s largest lift pass areas with over 1200km of maintained piste served by nearly 500 lifts on one ticket.
Also, since yesterday, St. Moritz hosted the Ladies Audi FIS Alpine Ski World Cup. Anja Paerson (Swe) dominated the course once again at St. Moritz on Friday, winning the World Cup Super Combined. During the weekend two speed events take place in the Swiss Resort: Downhill and Super G. St. Moritz lies on the south side of the Alps, in the Engadine Valley. St Moritz is Switzerland's most famous exclusive winter resort: glitzy, expensive, and fashionable. The Engadine Ski Paradise: St. Moritz-Corviglia, Corvatsch, Diavolezza are synonymous with breathtaking and unforgettable skiing experiences. 60 modern transportation facilities open up on 350 km of snow covered runs at altitudes from 1,800 to 3,300 metres above sea level of slopes in nine different skiing areas with 37 mountain restaurants.
Posted by Ski Paradise at 8:37 AM