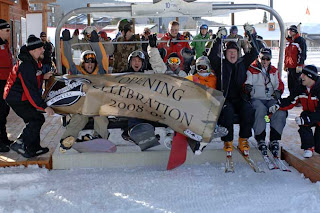 The unprecedented snowfalls in the Alps, Dolomites and Pyrenees over the past few weeks have eased slightly but http://www.skiinfo.com/ reports that the snow is still falling across most of Europe and most of the continent’s resorts are now open and boasting superb powder snow conditions.
France has been one of the main beneficiaries this week with Meribel posting the greatest accumulation over the past seven days of up to 1.5m (five feet). Skiinfo issued five powder alarms on Saturday for Les Gets ( 60cm/2 feet), Avoriaz and Morzine both 50 cm (20 inches), Val Thorens 35 cm (14 inches) and Le Grand Bornand (30 cm/12 inches). More snow is forecast and French resorts opening this weekend include Flaine, Les Arcs, Pra Loup and Valloire and Vars.
Italy, which saw the biggest falls last week, is continuing to see more snow with Skiinfo.com’s Turin office reporting snow continuing to fall at present. As a result the country has now notched up the biggest current snow depths in the wall with Passo Tonale’s glacier topping the charts with a 370cm (over 12 foot) base. Over on the West of the country Alagna is not far behind with 315cm (10.5 feet). Skiinfo is issuing new powder alarms to subscribers today for numerous Italian resorts, including Cervinia which has just received another 40cm (16 inches) and Skiinfos Snowfinder service is predicting a further 100 - 120cm of fresh snow in the Dolomites in the next 48 hours, bringing the falls over the past two weeks to more than three metres (ten feet). The down side to all the snow is traffic problems and power lines being brought down as well as a serious risk of avalanche in the mountains. In the past 48 hours three people have died on Italy’s mountains with off piste and ski mountaineering especially dangerous.
Many of Switzerland’s leading resorts have been open for a month now having enjoyed great snow conditions through November. Bases are approaching three metres (ten feet) in many higher resorts. Saas Fee will offer free skiing in Kreuzboden-Hohsaas this weekend December 13th-14th. It has 80km (50 miles) of piste open from top to bottom. Zermatt has more than 100km (63 miles) of piste open including the Italian link to Cervinia/Valtournenche and up to 250cm (over eight feet) snow depth. Elsewhere Laax has 170cm (Nearly six feet) of snow on the glacier and St. Moritz 180cm (Six feet) of powder with still more snowfall expected at the weekend.
In Austria the big resort opening this weekend is at Söll on the Skiwelt which will celebrate with a special winter opening package including two nights, ski pass for two days for Wilder Kaiser – Brixental and entrance to party area with live music from €129 per person. The country’s glacier ski areas have the most accumulated snow depth with 195cm (6.5 feet) on the Pitztal Glacier and the same at Sölden. Snowfall has eased in the past week with areas typically reporting 20-40cm (8 – 16 inches) of fresh snow in total.
Germany also has good snow cover with 140cm (nearly five feet) of snow at the Zugspitz, by Garmisch, which has had another 45cm (18 inches) of snow this week.
In Scandinavia more than 40 resorts will be open in Norway this weekend. Skiinfo.no recommends that if you’re planning a Christmas trip to the country’s capital, Oslo, you bring your skis. The local ski hills of Tryvann, Kirkerud, Varingskollen and Oslo Skisenter are all open and currently have 30-50cm (12 – 20 inches) of snow on their slopes. Across Norway most major resorts have 560-70cm of snow with Tryil currently top with 73cm (2.5 feet).
In the Pyrenees, which saw unprecedented huge snowfalls in late November, powder conditions are the norm in French, Spanish and Andorran ski resorts with snow depth peaking at around 190cm (over six feet) in resorts like Formigal and Cerler in Spain.
In Eastern Europe it’s a mixed picture with limited terrain open in Bulgaria where the weather has been rather warm. To the north things are better in the Czech Republic, where more than 30 resorts are open and in Slovakia where Park snow Štrbské Pleso has 150cm (Five feet) of snow on upper slopes. Jasná is offering special low-priced lift tickets this weekend with a day pass costing just 15 Euros per adult, the resort is also operating a new snow fun area for children and new dining options.
Scotland has three ski areas open on the Eastern side of the country at Glenshee, the Lecht and Cairngorm, all have limited terrain open.
In North America the picture has improved in some regions but remains challenging along the West Coast with unseasonably warm weather only allowing for limited opening on usually machine made snow.It’s a better picture in Colorado where up to two feet of snow has fallen in the past week at resorts like Breckenridge and Vail. Steamboat was the latest to open at the weekend. East coast ski areas have also received more snow continuing their healthy start to 2008-9 – Vermont is doing particularly well with snow depths passing 90cm (three feet) at leading resorts such as Killington and very low temperatures helping to maintain snowfall and provide ideal snow making conditions. In Canada ski areas in Alberta and British Columbia have also received more snow bringing depths typically up to 60-90cm (2 – 3 feet).
Posted by Ski Paradise at 6:53 AM