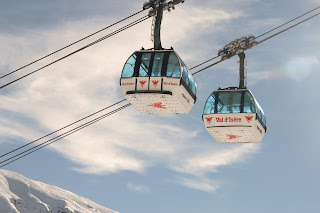 Two months before Val d'Isere will celebrate the 2009 FIS Alpine World Ski Championships, the International french resort hosts the men's Audi FIS Alpine Ski World Cup Super Combined, Super G (replaces the Beaver Creek cancelled races), Giant Slalom and Slalom races on December, 12, 13 and 14, 2008. The slopes to be used at these events are exactly the same as what will be raced in the 2009 World Championships, including the legendary Bellevarde Olympic “Face”, which hasn't been used as a race slope since the 1992 Olympic Winter Games.Val d'Isère is a megaresort located in the Savoie, recognisable by its charming Chalet architecture. People come to Val d'Isere with precisely one purpose in mind: to Ski. Val d'Isere offers to the skiers one of the most incredible Ski Paradises in the Alps: the Espace Killy, the Val d'Isere and Tignes combined skiing area, named in honour Jean-Claude Killy a magic skier, racing for Val d'Isere who won 3 gold medals in the 1968 Olympic games. 300 kilometres of slopes are served by 89 modern lifts. A playground for every skier with two glaciers (Pissaillas Glacier in Val d'Isere and the Grande Motte in Tignes) and 154 runs classified 22 green, 61 blue, 46 red and 25 black.
Posted by Ski Paradise at 7:07 AM