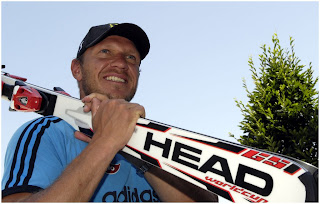 Hermann Maier, "Herminator", returns to the victory path in Lake Louise. The veteran, who celebrates his 36th birthday next week at Beaver Creek, finished with a clear lead at the Lake Louise Super-Giant Olympic run. Maier's last victory came in 2006 in Kitzbühel SG event.
But the last two seasons the four-time Overall World Cup Champion (1998, 2000, 2001, 2004)only reached a couple of podiums in SG. He also failed at Are 2007 where he made a remarkable statement after finishing a modest 21st in Giant Slalom: "I have enjoyed so much success in my career that I can also handle these sort of results, you also need to experience those less happy moments in a racing career to fully appreciate your past achievements (...) I can't be content but that's part of the deal I guess".
Hermann Maier represents the spirit of the true athletes, in the victory but also in the defeat, overcoming all kind of difficulties. Hermann Maier began entering ski races at the age of five. When he was fifteen, a growth disorder forced him to give up the sport temporarily, during which time he worked as a bricklayer. He began representing Austria internationally in 1996 and achieved immediate success. During the Downhill at the 1998 Nagano Olympics he lost control and took a spectacular fall. Incredibly three days later he raced in the SG and won the gold medal. Three days after that he earned a second gold medal in the Giant Slalom.
His racing career nearly ended following a near-fatal motorcycle accident in August 2001; he collided with a car on his way home from a summer training session in Austria. Doctors nearly amputated his lower leg, but instead Maier underwent massive reconstructive surgery. He returned to international competition in January 2003 in Adelboden. Just two weeks later, he shocked the skiing world with an amazing SG victory in Kitzbühel.