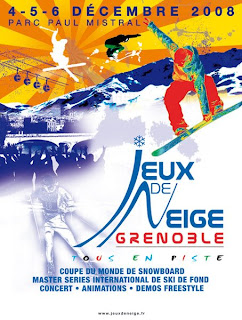 Last weekend the third Big Air of the 2009 LG Snowboard FIS World Cup took place in Grenoble. At the first ever LG Snowboard FIS World Cup big air event in France, Mathieu Crepel as representative of the Equipe Tricolore was victorious in Grenoble's Park Paul Mistral. He won in front of 15,000 spectator relegating Stefan Gimpl (AUT) and Jaakko Ruha (FIN) to the second and third ranks, respectively.
The snowboard show on December 6th, 2008, took place within the "Jeux de Neige" in the park Paul Mistral of the bidder for the 2018 Olympics. The programme of sporting activities also includes a Masters Series cross-country sprint, a jibbing demonstration and a Team Ski Battle. Other features of the event include the projection of skiing films, a tobogganing run, introductory cross-country skiing sessions, shows and special snow areas for kids and a grand parade with a pyrotechnic "ballet" for all the family.
Henri Serandour, president of the French National Olympic and Sporting Committee (CNOSF), announced last September 24th France will compete to host the 2018 Olympic Winter Games. The cities of Grenoble, Annecy and Nice have already stated their intention to bid to host the Games. Grenoble looks in a good position though it is rare for the same city to organise the games twice. The mayor of Grenoble Michel Destot said the town would emphasize its strong Olympic history with the hope of being nominated as hosts next year.