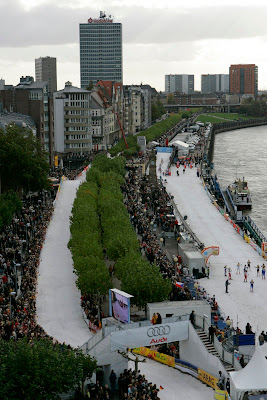 Last weekend the FIS Ski Cross Country World Cup started in Düsseldorf at the banks of the river Rhine. The snow specialists from ski dome Jever Skihalle Neuss are in charge to prepare a perfect track for FIS World Cup Cross Country and for the athletes from all over the world. The technicians need over 3000 cubic metres of snow made from 1500 cubic metres of water (the amount to fill a 50m swimming pool) to build the World Cup track. The snow is made in the ski hall. Twelve snow cannons installed under the ceiling of the snow dome produce finest fog by spraying pure drinking-water without any chemical additives through a high-pressure injector. Ice-cold air and pre–cooled water add up to superfine fog. As the air inside the ski dome has -4 degrees the fog crystallizes to finest snow on its way from the ceiling down to the ground. When the slope in the ski dome is prepared the snow has a temperature of -17 degrees. This temperature guarantees the ideal consistency of powder snow.The snow transport to Düsseldorf’s Old Town is the most challenging organisational part to build the World Cup track. The snow, at a temperature of -10 to -14 degrees, is brought outside to be loaded on trucks. Five trucks shuttle from Thursday 18th December on the short route between Düsseldorf’s banks of the river Rhine and snow dome Neuss. The snow is delivered to snow-depots, at the lower waterfront. Covers protect the snow against rain or solar irradiation and keep in the cold. Starting on Friday the snow crawlers spread the snow equally over the whole area of the World Cup track. The completion of the slope is hand-made by slope technicians. A drainage system was developed by the technicians to avoid puddles on the World Cup track when the weather conditions are unfavourable. The underground beneath the snow is a layer of punched mats. The holes in the mats make sure that melting water drains off in case of high temperatures. Overnight from Saturday to Sunday a layer of fresh snow ensures that the track endures the extraordinary charges of the World Cup weekend.
How about the ecological aspects of the Ski World Cup on the Rhine? The most important ecological aspect and main cause of an environmental impact at large events, is usually the traffic around the event. Over 90 % of the total energy consumption is caused by traffic. The entire energy consumption for carrying out the FIS World Cup Cross Country in Düsseldorf is approximately 165,000 kilowatt-hours. The current consumption for the whole event lies in the usual range of large events. In relation to the number of visitors, the energy consumption per visitor corresponds for example to the current consumption per visitor at a large Rock concert in a (Football) stadium. Also the energy consumption per visitor with a soccer federal league play might be comparable.
Posted by Ski Paradise at 7:43 AM