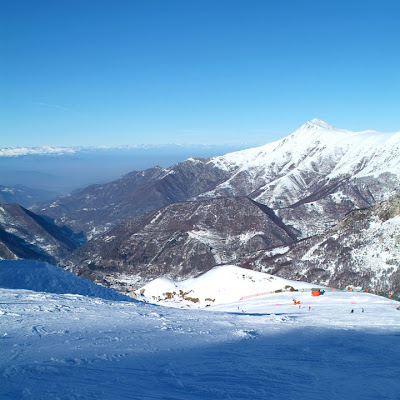 Last Sunday, December 14th, the first Parallel Giant Slalom of the 2009 LG Snowboard FIS World Cup took place in Limone Piemonte. After 2007, it was the second time that the italian ski resort staged a World Cup competition.
Doris Guenther (AUT) and Matthew Morison (CAN) were the winners of the FIS races. The Austrian succeeded in the strong international field and dominated the thrilling final in Limone Piemonte against Kimiko Zakreski (CAN). Anke Carstens from Germany came in third ahead of her teammate Selina Joerg. On the men's side Matthew Morison relegated Sylvain Dufour (FRA) to the second place. Morisons teammate Jasey Jay Anderson captured the third spot on the podium ahead of Austrian Manuel Veith.
Limone Piemonte, one of the oldest Alpine villages in Italy, is a municipality in the Province of Cuneo in the Italian region Piedmont, located about 100 km south of Turin and about 20 km south of Cuneo, on the border with France. The ski area (Riserva Bianca), located in the so called "Regione delle Alpi del Mare" offers 80 km of runs (Beg: 20% Int: 70% Adv: 10%), 16 ropeways, a wonderful conch which links the 3 valleys and offers both beginners and experts the chance to choose their level of difficulty.
L.I.F.T. S.p.A , the society which controlls the entire ski area of Limone, is making a radical remodernising of the ski lifts.
Posted by Ski Paradise at 7:38 AM