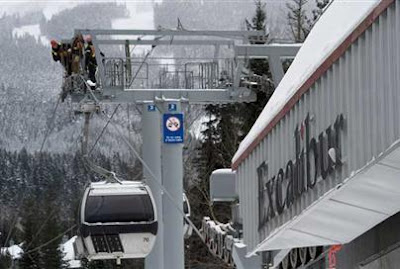 The BC Safety Authority has reinstated the operating permit for the lower line of Blackcomb Mountain's Excalibur Gondola following inspections Tuesday. Repair work on tower 4 was completed Monday and testing took place throughout Tuesday in accordance with BC Safety Authority and Doppelmayr test protocol. The Excalibur Gondola was in full operation yesterday December 24.
"We are extremely pleased with the efficiency in which we have been able to return this lift to operation", says Wayne Wiltse, Whistler Blackcomb's lift maintenance manager. "The tower has been rebuilt, and the cable has been inspected. They have both been non-destructively tested to ensure they meet all code requirements. A thorough inspection, as outlined in Whistler Blackcomb's Safety Management Plan, and following procedures recommended by the lift manufacturer, has been undertaken to ensure the safety of our guests. In addition, the BC Safety Authority has been on-site Tuesday doing its own inspection before reinstating our operating certificate".
In accordance with the lift manufacturer's test protocol, Whistler Blackcomb lift maintenance crews perform a "sounding" test on the towers to check for the presence of water. This test was considered an effective way to check for the presence of water in towers. Following the failure of tower 4, all Doppelmayr lift towers across Whistler Blackcomb were checked for water build-up. This was done first by Whistler Blackcomb lift maintenance crews on Tuesday night after the incident. A secondary inspection was undertaken by Whistler Blackcomb in conjunction with the BC Safety Authority the next morning before operations commenced for the day. Since then, BC Safety Authority has issued a Safety Order requiring all BC ski resorts to inspect all lift towers for water, regardless of manufacturer. In light of the Excalibur incident, Doppelmayr has revised its test protocol to now include concrete filled towers.
The investigation into last week's tower failure remains ongoing. The cause of the tower failure was confirmed by early the next morning, December 17, and was due to an unusual situation called "ice-jacking". Water had accumulated within the tower, then transformed to ice to a point whereby the pressure from the ice created a rupture that separated the two sections of the tower. The force of the ice expansion and the subsequent rupture has been estimated at 800 tonnes of pressure. Prior testing had not revealed this ice build-up due to the tower being concrete-filled.
"Our commitment to safety at Whistler Blackcomb is uncompromised", says Doug Forseth, Whistler Blackcomb's senior vice president of operations. "We have been working around the clock with the authorities and independent experts to understand what happened here last week. Through these efforts, a new Safety Order from the BC Safety Authority, and a safety bulletin from the lift manufacturer has been distributed to ski resort operators in BC and to the industry, in the wake of this incident".
Posted by Ski Paradise at 6:26 PM