From May 1st to 4th Sölden's Glacier becomes a unique party zone to celebrate the end of the winter season. The program boasts a great variety of highlights, ski and snowboard tests of the 2008/09 winter equipment, live acts, and a lot of fun. Daredevils can win prize money at the ultimate Waterslide & Crazy Vehicle Contest held tomorrow. On Saturday you can enjoy on the Rettenbach glacier a great concert by Manfred Mann's Earth Band one of the most renowned groups performing songs and hits from the 70ies. The admission to the concert and the glacier stadium is free.
Sölden offers one of Austria's largest glacier areas. In the Rettenbach Glacier and Tiefenbach Glacier you can enjoy 38 kilometres of Ski Runs (25 blue and 13 red) served by 10 Ski lifts (3 gondolas, 2 chair lifts and 5 T-bar lifts). From October 11 to November 21, 2008 both glacier skiing areas are in operation for the Autumn & Pre-Winter Season (All ski lifts in operation from 09.00 am to 04.00 pm).
Posted by Ski Paradise at 5:08 PM 2 comments:

Grand Targhee, a year-round resort located in Alta, Wyoming on the western slope of the Teton Mountains, has proclaimed its entire base area will become smoke free as of June 1st. The policy asks all visitors and employees of the resort to refrain from smoking anywhere at the resort except for location at the east end of the main parking lot where appropriate trash receptacles will be located. Smoke-free areas include all buildings, the entire base area, parking lots, lift lines, and chairlifts. Targhee began to limit smoking back in 2002, when all resort lodging units were designated as smoke-free. The base facilities, including the Trap Bar, followed in 2003. “Our pristine environment immediately conjures up clean air and the participation in a healthy lifestyle. I truly believe our comprehensive no-smoking policy definitely compliments that expectation, and that our guests and staff will all directly benefit from this new initiative”, said Susie Barnett-Bushong, director of marketing.
The Resort is committed to creating a healthier community and environment for all visitors and employees. Smoking remains a national health issue. The Centers for Disease Control reports that in 2006, tobacco related-illnesses were the leading cause of preventable death in the country, killing more than 400,000 people, and that second hand smoke exposure was the third leading cause of preventable death, killing nearly 50,000.
Posted by Ski Paradise at 12:43 PM 2 comments: 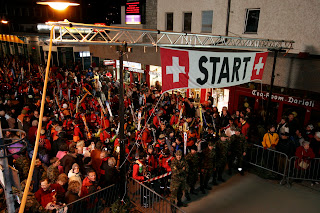 This morning the first patrol comprised by Troillet Florent, Moret Didier and Hug Alexander from Switzerland arrives at Verbier. The legendary ski touring race started in Zermatt in the night from Wednesday, 16th April 2008 to Thursday, 17th April 2008.
The origin of the Patrouille des Glaciers goes back to the last world war when the mountain brigade No. 10 had the task of defending the south-eastern area of the central region of the Swiss Alps. The idea of carrying out the Patrouille des Glaciers was the initiative of two captains in the Mountain Brigade No. 10 shortly before World War II. Rodolphe Tissières and Roger Bonvin, both alpine officers, determined to test and consolidate the capabilities of the troop with a special long patrol race. In actual terms this meant running the Haute-Route between Zermatt and Verbier in one stage. The idea was to give the participants the opportunity to put into practice in one major exercise the technical knowledge they had attained during their long service in the mountains.
Nowadays the Patrouille des Glaciers continue to be a military competition organized by the Swiss Army but open to Swiss and foreign military or civilian patrols and takes place every two years. Participants can choose between two routes/categories and have to complete it in a single stage:
Course A: Zermatt-Verbier (Distance: 53 km, change in altitude +3994 m / -4090 m, equivalent flat distance; 110 km)
Course B: Arolla-Verbier (Distance 26 km, change in altitude +1881m / -2341 m, equivalent flat distance: 53 km).
International participants in the 2008 edition came from Andorra, Austria, Belgium, Canada, Denmark, Finland, France, Germany, Great Britain, India, Italy, Lebanon, Liechtenstein, Luxembourg, New Zealand, Romania, Slovenia, Spain, Sweden, and the USA.
World Radio Switzerland: Listen to Brigadier Marius Robyr, commander of the patrol, giving participants their final briefing 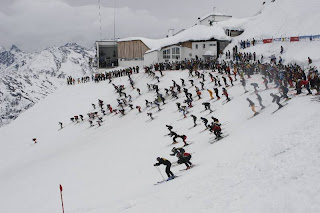 Tomorrow April 19th, St. Anton am Arlberg will host a new edition of Der Weisse Rausch (The White Thrill). Several hundred skiers, Snowboarders, Bigfooters and Telemarkers meet on the Valluga at 2650 meters for the mass start. Participants cover a 9 kilometres trail through Valfagehrjoch, Ulmerhütte, Steißbachtal, Moos and finally St. Anton.
The race is named after Der Weisse Rausch Film (White Ecstasy, 1931) directed by Dr. Arnold Franck starring by Hannes Schneider and Leni Riefenstahl .
Der Weisse Rausch is also the first stage of the alpine triathlon "Arlberg Eagle". The overall winner must be ahead of the field in the ski race, in the half marathon (July 26th) and in the mountain-bike marathon (August 23rd). 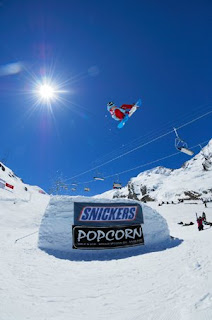 From 17-20 April, 2008, Saas-Fee host the II edition of Snickers Classic & Popcorn Wallride an event of the legendary TTR World Snowboard Tour. The "Swatch TTR Snowboard World Tour" enjoys worldwide recognition as the crowning highlight in a series of independent freestyle snowboarding events united under a global banner. The events have gained enormous popularity over the past five years and the tour’s global recognition has managed to revitalize competitive snowboarding. In its 6th year running, TTR has managed to top itself with a season of internationally top-listed snowboarding events like the Burton European, US Open and Air & Style Munich.
The Snickers Classic & Popcorn Wallride is open for everyone and offers everybody access to the qualification. Riders compete in the slope style run situated along the Längfluh area of Saas-Fee, specially designed by Frederik Kalbermatten for the Snickers Classic. On Sunday an 8-meter high Popcorn Wall decide the overall winner, the "King of Popcorn 2008". 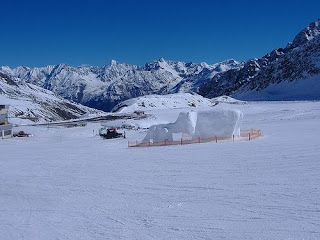 Today April 11th the historical spectacle of HANNIBAL will be performed on the giant open-air stage at Sölden's Rettenbach Glacier. 500 actors will take part in the new production of Carthage's epic attack on Rome by crossing the Alps. Snow cats as elephants. Skiers, climbers, parachutist act as modern-day warriors. Giant horsemen cross the endless glacier fields on their skidoos while flying acrobats try to hinder the attack. The ultimate showdown features plenty of music, light effects, video films and pyrotechnic shows.

From April 6 to 12, Vail (Colorado) hosts the 33rd Mountain Travel Symposium (MTS). The event is the largest and longest-running annual gathering of mountain travel professionals in North America. The week-long event includes three major components: trade shows, a Forum, and social events to foster networking opportunities. There are two separate and distinct trade shows--one that is specifically geared for Tour Operators (the Trade Exchange) and another one for Ski Club/Council organizers (the Group Exchange). The Forum includes two full days of professional development and education featuring presentations from nationally-known speakers as well as individual breakout sessions on practical and topical issues. Finally, a variety of receptions, parties, and activities are scheduled throughout the week to maximize networking and relationship building. MTS attracts more than 1,000 participants each year from ski resorts, lodging properties, resort associations, domestic and international tour operators, airlines, ground transportation companies, travel insurance companies, and related service providers. The event ends tomorrow with a great BBQ on Sarge’s Shelter at Mid Vail.
Next year, Keystone (Colorado) will host the Mountain Travel Symposium on March 29 – April 4.
Posted by Ski Paradise at 7:00 PM 2 comments: 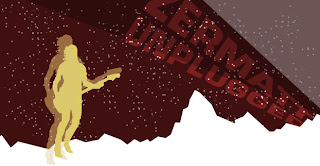 Four days, 10 concerts. From April 9th until April 12th 2008 the Swiss village of Zermatt hosts the 2nd Zermatt Unplugged. The festival presents – as the only large swiss concert platform – well known national and international artists (Canadian rocker and seven-time Grammy winner Alanis Morissette, Gabrielle, Glen of Guinness, Gotthard, Jamie Scott and The Town, John Lord -founding member of legendary rock band Deep Purple- with his Gemini Band, Lingworm, Made in Mind, Nazareth, Reamonn, Reto Burrell, Weyermann and Lee Everton) and a place for exchange. An opportunity to enjoy the best music in the greatest scenery, surrounded by breathtaking views at the foot of the Matterhorn.
"It is our goal to establish Zermatt Unplugged as the most exclusive music festival in Switzerland, by presenting established names in an intimate setting and by offering, at the same time, a platform to newcomers of the international music scene" say the organizers.
Posted by Ski Paradise at 8:54 PM 1 comment: 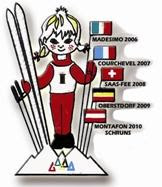 From April 6th to April 9th the 43rd Youth Ski Cup took place on the former world cup slope Plattjen at Saas-Fee in Switzerland. The 150 competitors, aged between 9 and 15, came from 5 winter sports centres: Madesimo IT, Courchevel FR, Montafon (Schruns) AUT, Oberstdorf D and Saas-Fee CH, and represent their countries colours. Skiers competed in Giant Slalom and Slalom disciplines.
This is the 9th time that Saas-Fee hosted the International Youth Cup with the organization being handled by the local Ski club, the SSC Allalin Saas-Fee, which is celebrating its 100th anniversary.
Founded in Madesimo, Italy in 1966 by Mauro Gian Nova, this "Youth Olympiad" includes all the highlights known to us all from the Alpine competitions of the adults including opening celebrations as the nations march in with their banners from the village square to the Kalbermatten sports field, the lighting of the Youth Cup flame, the moving award ceremony with national anthems and the crowning closing ceremony on the village square.
Posted by Ski Paradise at 6:09 PM 1 comment: 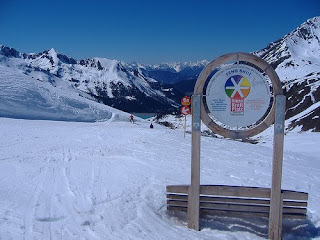 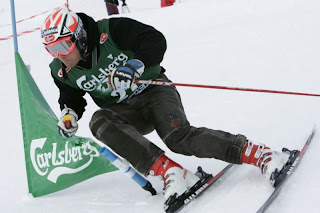 The 9th edition of the Verbier High Five by Carlsberg took place yesterday April 5, allowing people to compete against champions of the ski, snowboard, freeride and acrobatic ski world cups in a festive atmosphere. A selection of the best professionals were present for the 2008 edition: Daniel Albrecht, William Besse, Marco Büchel, Didier Cuche, Didier Défago, Antoine Dénériaz, Edgar Grospiron, Aksel Lund Svindal, Bertand Denervaud,Guillaume Nantermod, Xavier Jordan, Mike Aeschbach, Fränzi Aufedenblatten, Chemmy Alcott, Sylviane Berthod,
Janette Hargin, Julia Mancuso, Spela Pretnar, Claudia Riegler, Lindsey Vonn-Kildow. The event was open to skiers as well as to snowboarders, with five disciplines very different one from each other: Giant Slalom, Boarder and Skiercross, Speed Skiing, Humorous «Triathlon » and Parallel Slalom.
Around 3.30 PM prizes were distributed at the Chalet Carlsberg and everyone returned to Verbier skiing together with the athletes. The competition concluded with a gigantic after-ski at the Montfort Pub with live music and animations.
Posted by Ski Paradise at 6:16 PM 1 comment: 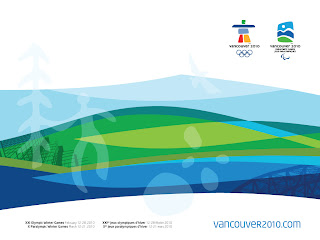 The Vancouver Organizing Committee for the 2010 Olympic and Paralympic Winter Games (VANOC) yesterday March 31, released its second corporate Sustainability Report, re-affirming its commitment to deliver a socially, economically and environmentally responsible Olympic and Paralympic Winter Games in 2010. The report covers the 12-month period between August 1, 2006 and July 31, 2007, and can be viewed at http://www.vancouver2010.com/. .
“Sustainability touches everything at VANOC,” said John Furlong, VANOC Chief Executive Officer. “It is a consideration in all our planning and daily activities. With just under two years remaining until the 2010 Winter Games, this report details the steps we are taking to live up to our commitment to convene sustainable Games and to produce enduring benefits locally and globally”. VANOC’s 2006-07 Sustainability Report takes a comprehensive look at outcomes in six performance areas under VANOC’s direct control: accountability; environmental stewardship and impact reduction; social inclusion and responsibility; Aboriginal participation and collaboration; economic benefits; and sport for sustainable living.

Areas indicating progress by the Organizing Committee in the 2006-07 report include:


Sustainability performance areas VANOC says it is aiming to improve and/or focus on during the next 12 months include: