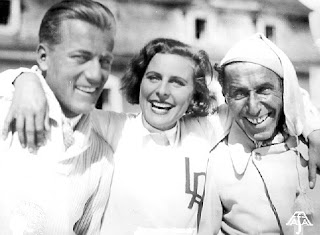 Tourism on the Arlberg dates back to the 19th century. But it was not until the advent of Alpine skiing, pioneered to a large extent by men from the Arlberg, like Hermann Hartmann who climbed the Galzig for the first time on skis on 1899, Professor Karl Gruber, Max Madlener, Josef Ostler, Oswald Trojer, the landlord of the hospice of St. Christoph, and Viktor Sohm.
The history and the development of ski are, without a doubt, closely associated with St. Anton am Arlberg -and its neighbouring village of St. Christoph- and the eminent Austrian skiing pioneer Hannes Schneider (1890-1955). Hannes Schneider laid the foundation stone for today’s global “ski school” upon his invention of the Stem Christiania –a stem turn- and, consequently, his “Arlberg technique”.In the twentys Arnold Fanck films contribute to the popularity of Hannes Schneider and the Arlberg Technique. In 1926 Fanck and Schneider published the work Wunder des Schneeschuhs (The Miracle of the Snowshoe). Ein System des richtigen Skilaufens und seine Anwendung im alpinen Geländelauf a ski handbook published many times in many languages.
In 1927, Arnold Lunn visited the Arlberg in order to become acquainted with Hannes Schneider and the skiing technique he knew from the films by Arnold Fanck. Lunn’s visit to the Arlberg in 1927 had far-reaching consequences: together with Hannes Schneider, he planned the first Arlberg-Kandahar competition for 1928. From 1931 on, the competition was held alternately in Mürren and St Anton.
Der Weisse Rausch (White Ecstasy) –the first skiing film to be set to music- was made in 1931 on the Arlberg. It was also Hannes Schneider’s last major film role in which he played himself as a ski instructor. The plot was a really simpleone: a “cheeky little madam from Berlin” (played by Leni Riefenstahl) learns how to ski at Schneider’s ski school, and in the subsequent fox chase, her and Schneider are chased by 50 pursuers. Further roles are played by the young Lothar Ebersberg, Guzzi Lantschner and Walter Riml, plus Rudi Matt, the most talented actor amongst all the Arlberg ski instructors.
Posted by Ski Paradise at 7:00 PM