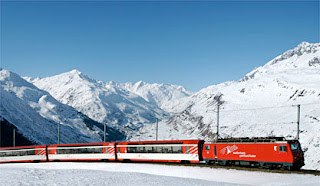 In the roaring 1920s, and because of adventurous reports from alpine enthusiasts, the travel-keen upper-class from all four corners of the world at long last discovered the rustic charms of the Swiss Alps; previously remote mountain villages such as Zermatt and St.Moritz were transformed into chic health resorts. In June 25, 1930 the Glacier Express ran for the very first time from Zermatt to St. Moritz. The opening of the Furka base tunnel in 1982 also signified the year-round operation of the Glacier Express and passenger numbers quickly rose from around 20,000 to 90,000. The first use of panorama carriages in 1993 marked a further milestone in the history of the Glacier Express. Since then, around 250,00 enthusiastic passengers per year have enjoyed the trip with unique panoramic views of the passing mountainscapes. A year after its 75th anniversary, the train operated by the partnered Rhaetian Railway (RhB) and Matterhorn Gotthard Railway (MGBahn), invested over 50 million francs in 24 new, modern panorama carriages and four service carriages.
Now, to further develop the positioning of the Glacier Express as a premium product, both partners have decided to jointly order additional panorama cars. This means that as from the summer of 2009, four equivalent trains will operate daily services between St. Moritz/Davos and Zermatt. To achieve this, RhB and MGBahn are investing a total of approx. 20 million francs in new rolling stock. The new panorama and service cars are being purchased from Stadler Rail AG in Altenrhein.
Posted by Ski Paradise at 9:56 PM