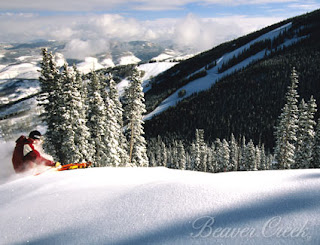 Vancouver 2010 introduced to the world mascots Miga, Quatchi and Sumi 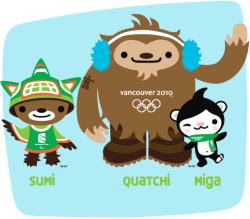 More than 800 schoolchildren from grades three to five filled the Bell Performing Arts Centre in Surrey, BC today to witness three enchanting characters emerge from the mists of a magical West Coast setting of gigantic trees, soaring mountains and a restless ocean, to take their place in history as cherished personalities of the 2010 Winter Games. Designed by the Vancouver-based company Meomi Design, Miga, Quatchi and Sumi were inspired by local Aboriginal mythological creatures and also strongly influenced by popular culture, modern animation styles, the Olympic and Paralympic Movements, the culture and wildlife of British Columbia and Canada, and the artists’ own imagination.

Miga is a snowboarding sea bear inspired by the legends of the Pacific Northwest First Nations – tales of orca whales that transform into bears when they arrive on land. Part Spirit Bear, a rare white bear unique to BC, Miga’s outgoing spirit and high energy draw her to action and adventure.

Quatchi, a shy and gentle giant, is a sasquatch – a popular figure in local Aboriginal legends of the Pacific West Coast. Quatchi reminds us of the mystery and wonder associated with the great Canadian wilderness. Although Quatchi loves all winter sports, he’s especially fond of hockey and dreams of becoming a world-famous goalie.

Sumi is an animal spirit who wears the hat of the orca whale, flies with the wings of the mighty thunderbird and runs on the furry legs of the black bear. With a name that is derived from the Salish word ‘sumesh,’ meaning guardian spirit,’ Sumi is passionate about the environment and is a fan of all Paralympic sports. 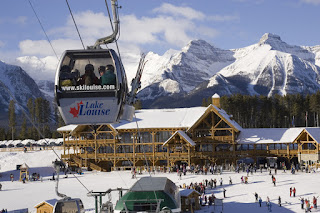 The Audi FIS Alpine World Cup continues at Lake Louise and Panorama in Canada. On Saturday, Lake Louise hosts the first downhill race and on Sunday it is time for the first super-G too. At the same time, the ladies’ World Cup tour will also continue in Canada this week. Panorama Mountain Village, British Columbia, will host the Giant Slalom and Slalom races on Saturday-Sunday.
Located in Alberta, Canada, Lake Louise is one of the largest ski areas in North America. With abundant natural snow (average snowfall 454 cm), backed up by Canada's largest snowmaking system (40% of the marked runs), Louise guarantees skiing from early November to mid May. 139 runs (25% Beginner, 45% Intermediate, 30% Advanced) and a vertical drop of 991 metres, Lake Louise offers wide opportunities for skiers from perfectly groomed beginner runs to double black diamonds rated "the best super steeps in the country" (Ski Canada Magazine). The Canadian Ski resort is one of the best options to enjoy magnificent scenery and stunning panoramas. 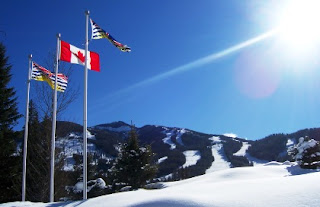 Located in the Canadian Rocky Mountain region, British Columbia, Panorama Mountain Village is owned and operated by Intrawest Corporation. With abundant natural snow (average snowfall 479 cm), backed up by a largest snowmaking system (40% of the marked runs), Panorama guarantees skiing from early November to late April. 120 runs (20% Beginner, 55% Intermediate, 25% Advanced) and a vertical drop of 1,220 metres, with a long run of 5.5 km called Never Never Land in Bowl Taynton. Panorama Mountain Village offers an intimate community setting with cosy lodging; a pedestrian village with a variety of restaurants and après ski options, including the giant slope side Panorama Springs Hot Pools.
Posted by Ski Paradise at 9:12 AM 1 comment: 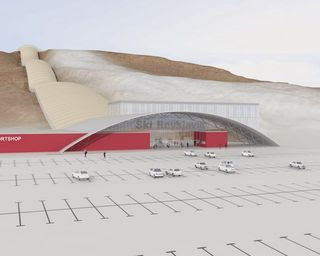 The Icelandic Ski Federation, as part of its plans to develop skiing in the country, is preparing a very ambitious project known as the Ski House that would include a full-length World Cup level slalom slope indoors. The slope is planned to be built into a hill known as Úlfarsfell in the heart of the Reykjavik region. The hill allows for a vertical drop of 180 metres and a length of over 800 metres. Lift capacity is scheduled for over 4000 people every hour with variable slopes for both beginners and advanced skiers. Discussions are currently underway with the Reykjavik Municipality with opening planned in the autumn of 2010.
Video of the Building project
Posted by Ski Paradise at 6:42 PM 1 comment: The Audi FIS Alpine World Cup slalom competitions scheduled in Levi (FIN) for this weekend had to be canceled due to poor snow conditions and unfavorable weather forecasts. The events have been re-scheduled at Reiteralm (AUT), with the ladies’ race taking place today, and the men’s on Sunday.
Last year, Reiteralm also stepped in to pick up races when FIS has forced to cancell the ladies’ and men’s Alpine events in St. Moritz (SUI) and Val d’Isère (FRA) scheduled for the weekend of 9th-10th December. Current conditions on Saturday morning are overcast and cold with snowshowers and 70 cm of powder snow.
The ski resort of Reiteralm is located about 45 minutes south of Salzburg and is part of the Schladming-Dachstein Holiday Region, the No. 1 winter region in all of Styria. The Schladming 4-Mountain Ski Area comprise the famous winter sports resorts of Haus im Ennstal, Schladming, Rohrmoos and Pichl/Reiteralm. The Schladming-Dachstein Region is a member of the Ski Amadé, Austria’s biggest ski alliance: one ski ticket for 5 ski regions with 860 km of slopes and 270 lifts. 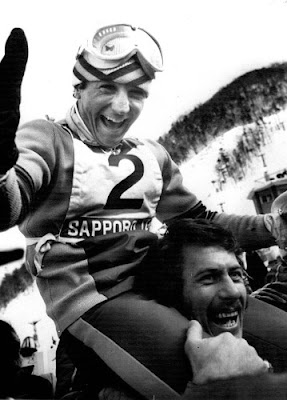 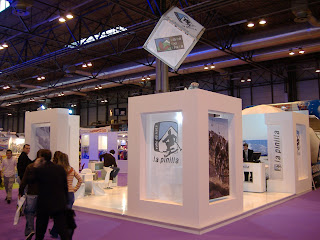 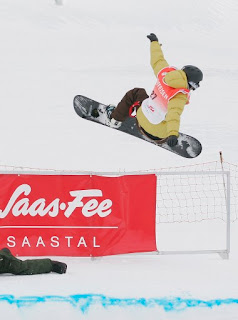 On the 1st and 2nd November 2007 the Nokia Snowboard FIS World Cup in half-pipe take place in the glacier village of Saas Fee, Valais (SUI). Snowboarders compete in the Allalin Freestyle Park, one of the most incredible half pipes in the world: 130-metre long with its steep 5.5 metre high walls at an incredible height of 3300 metres above sea level surrounded by a breathtaking panorama of glaciers and majestic four-thousand-metre peaks. Current conditions on Thursday morning are sunny weather, -3ºC and 113 cm of hard pack snow.
The qualification competitions are set for today, 1st November, with the semi-finals and finals on Friday, 2nd November. Nearly 100 riders from 19 nations are scheduled to show their best tricks to impress the judges who considers the height of jumps, the degree of difficulty, the landings and the general impression of the round.
Saas-Fee is the main village in the Saastal, one of the most scenically beautiful and diverse valleys in the Valais and in the Alps. This car-free village, nestling amongst glaciers and mountains, with their typical old Valais wooden houses create the perfect setting for winter holidays, deserving of its name “Pearl of the Alps”.