007 return to Switzerland to hit the slopes 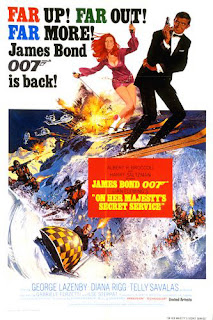 Daniel Craig's bid to be the perfect 007 has forced him to hit the slopes - according to The Sun. The actor -who made his debut in Casino Royal- has been taking skiing lessons to help him prepare for the next James Bond movie, tentatively titled “Bond 22”. A source said: “For the first time since 1969's On Her Majesty's Secret Service, Bond will be largely snow-bound. Much of it will be filmed in the Swiss Alps. The film is in pre-production for a major ski sequence”.
On Her Majesty's Secret Service 007 triumphed with its breathtaking battles on the Alpine slopes. The team of ski experts, including Stefan Zürcher Alpine Films producer, executed the challenging downhill scenes on the ski slopes of Mürren, on the Jungfrau Region in Switzerland. The filmmakers used the Schilthorn revolving restaurant to locate Blofeld’s Piz Gloria headquarters.
James Bond 007 is a fictional British agent created in 1952 by Ian Fleming. Some of the most iconic scenes in Bond history have taken place on the mountain slopes. In The Spy Who Loved Me, Roger Moore used a Union flag parachute after skiing off a cliff, while Timothy Dalton careered down a mountain in a cello case for The Living Daylights.
Posted by Ski Paradise at 12:15 PM 1 comment: 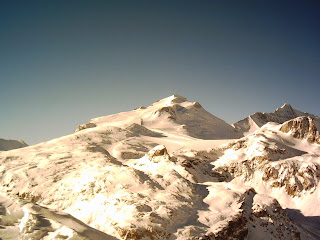 This weekend fresh snow has fallen to improve the start of the ski season in France on the glacier at Tignes. The Grande Motte is the highest ski area in the Espace Killy. The scenery is breathtaking with the Vanoise National Park to the south, the Grande Motte (3,656m) and Grande Casse (3,852m) to the west, the Mont Blanc (4,808m) to the north and the Grande Sassière (3,747m) to the east. The glacier ski area at 3,000 m offers in autumn 130 hectares, 20 km of pistes with 750 m of vertical drop, and a beautiful snowpark (750 m by 250 m).
From the 24th november, you can ski from top of Grande Motte glacier to Val Claret resort, that means 1,500m of vertical drop.
To hit the slopes of the Espace Killy, named after the skier and Olympic champion Jean-Claude Killy, you must wait until 1st december. Without doubt the Val d'Isere and Tignes combined skiing area is one of the most emblematic places to ski in the Alps. A modern lift network of 96 ski lifts: 2 funiculars, 4 cabin lifts, 4 cable cars, 45 chairlifts, 41 drag lifts – give access to 10,000 hectares and 300 kilometres of ski trails - 137 ski runs: 22 green, 64 blue, 35 red, 16 black - 9 slalom stadiums and 2 mogul stadiums - 2 half-pipes and 2 snow parks. The ski resort also has 331 snow canons which will ensure a bountiful supply of artificial snow for the slopes.
And to round things off nicely, you can go to Le Lagon a 5000 m² aqua centre dedicated to sport, relaxation and well-being…featuring amongst other things 2 swimming pools, 1 with waterslides, a balneotherapy area with sauna, steam room and jacuzzi, as well as fitness and exercise rooms, all with unrestricted views over Tignes lake and the Grande Motte glacier.
Tignes comprises 5 Villages; Val Claret, Tignes le Lac, and Le Lavachet close together at 2,100 metres, Tignes Les Boisses (1,850m) and Tignes-les-Brévières (1,550m).
Posted by Ski Paradise at 7:38 PM 1 comment: 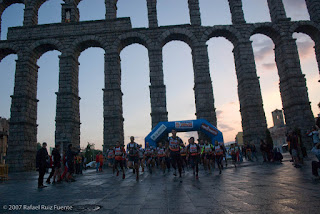 Austrian skiers from Kitzbühel ski down Mount St.Elias in Alaska

After a first failed attempt in May, Austrian skiers from Kitzbühel, Axel Naglich and Peter Ressmann, have become the first to ski down Mount St. Elias (5,489 meters) in Alaska on a run of about 20 kilometres, the longest ski descent ever.
The mountain known as “The Man Eater”, one of the peaks of the St. Elias Mountains on the Yukon border -the highest coastal range in the world- is a spectacular snow-covered pyramid renowned for its dangerous icy and massive vertical relief, 50 to 60 degrees on upper slopes. A glacial stream runs all the way from the top of Mount St. Elias down into Icy Bay in the Gulf of Alaska.
In 2002, two experienced ski mountaineers, Aaron Martin and Reid Sanders, died attempting the ski descent and their remains are under the ice on a slope near the summit.
On August 9th the team left the base camp on the Haydon Shoulder (3,000 meters) at midnight and climbed, through a loose rock face in the dark to avoid rock fall, to advanced camp (4,300 meters). Next day they left the advanced camp at 7:30 a.m. ascended to the high camp at 4,700 meters preparing the final push. On August 11th Axel Naglich and Peter Ressmann reached the summit at 12:50 p.m. and then, after a 10 minutes rest, began their descent down an unexplored line to avoid the avalanche-prone slope they had ascended. It took the pair less than two hours to ski to high camp, break down camp and continue the ski down to 4,300 meters where they camped. On August 12th the pair left their camp at 2 a.m., repelling down the treacherous rock face before dawn. They arrived back at Haydon Shoulder by noon and within hours had been picked up by the Super Cub airplane, who shuttled them back to Ultima Thule Lodge.
Axel Naglich (39), an architect and extreme skier from Kitzbühel, was already the first to ski down new extreme routes on Mount Cook in New Zealand three years ago and Mount Elbrus in the Caucasus, Europe’s highest mountain, four years ago. He has won the "24 Hours of Aspen" three times and has taken part in both the Red Bull Snowthrill in Chamonix and the X Games twice.
Peter Ressmann, ski guide and ski school owner, has skied China’s 7,500-meter Muztagh Ata as well as the Himalayan giant, 8,125-meter Nanga Parbat. He joined Axel Naglich on two attempts to descend Mount Cook’s as-yet-unskied Caroline face and in 2006 successfully summited and skied 8,047-meter Broad Peak in Pakistan’s Karakoram Range.
The film of the tremendous deed, directed and produced by Gerald Salmina, will be released on December 2007.
Posted by Ski Paradise at 10:45 AM 1 comment: